The 2021 South Coast HART Regional League took place over the weekend at the Shoalhaven Indoor Sports Centre, nine teams from around the South Coast region competed across two divisions.

In Division 2, day one was dominated by the Goulburn opens, going undefeated and top of the table, followed by Queanbeyan, Kiama and Goulburn rounding out the top 4.

In the Division 2 Grand Final, Goulburn Opens took on Queanbeyan. In the first 3 quarters, teams went goal for goal before the Goulburn Opens ended the third quarter in outright lead. Goulburn continued to dominate in the 4th quarter defeating Queanbeyan 44-35 and finishing winners of South Coast Division 2.

Division 1 saw some great battles and close games, it was the Illawarra Opens finishing the minor rounds undefeated and on top of the ladder. Queanbeyan closely followed losing only one match in minor rounds, followed by Shoalhaven and Illawarra 17s who rounded out the top four teams heading to the final’s series.

In the 3rd Place play-off Illawarra 17s held out the Shoalhaven Opens defeating them by 3 goals in a very close and hard-fought match. The final score 46-43.

In the Division 1 Grand-Final, Illawarra got off to a fast start, leading 14-6 over Queanbeyan at the first break, but Queanbeyan fought hard in the second quarter to level the game at 23 a piece at half time. In the 3rd quarter, both teams traded goal for goal before the Illawarra Opens managed to turn the momentum and score a couple of quick goals at the end of third quarter.

The final result saw the Illawarra Opens becoming the South Coast Regional League Champions with the final score of 46-36.

Regional League is also not possible without the team of dedicated umpires officiating matches over the weekend, thank you to all the team in white and a special mention to the Grand Final Umpires for Division 1 Lauren Hawkins, Jessie Reynolds and Rebekah Clark and for Division 2 Mackenzie King, Anna-Lisa Reeves and Natalie Atkin, and a special thank you to the Umpire Allocators Kim Chan, Jodie Correia and Torren Eyles-Balukea who worked with the umpires throughout the competition.

South Coast HART Regional League Coaches also had the opportunity to access invaluable mentoring over the weekend, thank you to Kylie O’Brien, an Advanced Coach and part of the Netball NSW South Coast Workforce, who was on hand to offer assistance to Coaches. 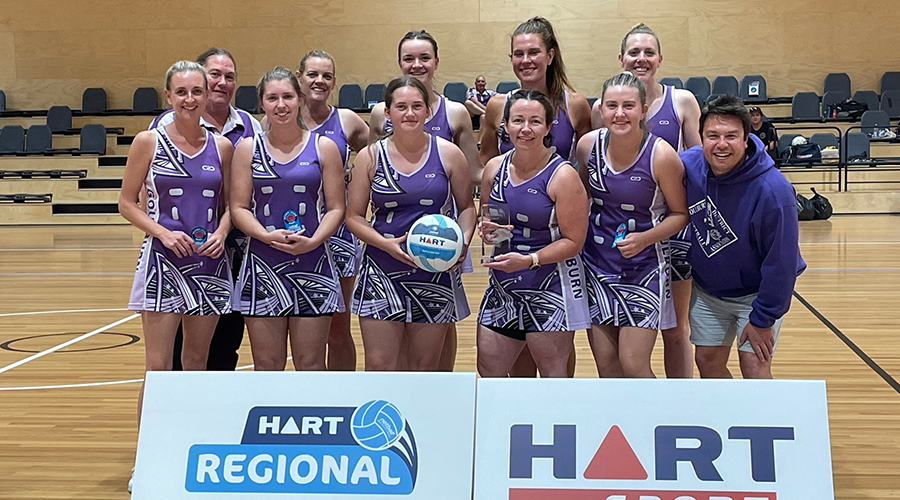