Netball NSW launched our first Reconciliation Action Plan with a 4-part webinar series exploring our RAP and the pillars within it further. Each week members of the RAP Working Group, Netball NSW Staff and key stakeholders within our netball community provided key insights and achievable takeaways to take back and implement within your netball club, association and community and take your steps toward reconciliation.

Webinar 1 - Together for Growth

"....it's about the role we can all play and the contribution each of us can make in ensuring we can effect change in this space for our sport and for our women and girls. Please walk beside us so we can do this together." - Alison Tucker-Munro, Netball NSW RAP Working Group Member

"having an opportunity where we could come together and celebrate community and culture and sport and all the things that we as Aboriginal people like to do in a competitive environment and where everyone is having fun and is comfortable." - Donna Cody, Project Officer, Indigenous Sport & Recreation - Office of Sport

“It is where we start our common understanding, without respect there is no common ground, it is important that we have respect for one another and each other’s views on why an Indigenous round and acknowledging cultures is important” - Georgina Cohen, Lismore Bundjalarms Netball Club and Netball NSW RAP Working Group Member

The Reflect RAP has been developed as a collaboration between the Netball NSW RAP Working Group and internal and external stakeholders. Netball NSW would like to extend their gratitude to the RAP Working Group Members for providing their insights and knowledge in the development of our first RAP:

Together For Growth by Maree Bisby

Together For Growth symbolises the many dimensions and levels of the netball community. The use of traditional symbols such as footprints, rain, meeting place and watering hole, along with stars, and the universe shows the ability of all to dream and reach for their goals. Individually we can soar but in a team, we can reach higher. It takes all of the natural elements of the earth to connect to one another and to believe and achieve greatness.

The seven paths around the netball symbolise the seven players on the court with the symbols of man, woman and person again representing the netball community, inclusive of gender identity or fluidity. No path in life and success is straight, hence the curvature and direction of the path, leading to one’s own destiny. The path is off the canvas, to highlight that we each are members of the community and can influence each other in our own way. The brightness of the colours symbolise the fun and positivity of netball and the harmony and connection we all have.

Maree Bisby, is a proud Wiradjuri woman with family originating from the Mudgee Region. Bisby enjoys netball with family and friends in the Newcastle area, as both a player and parent. 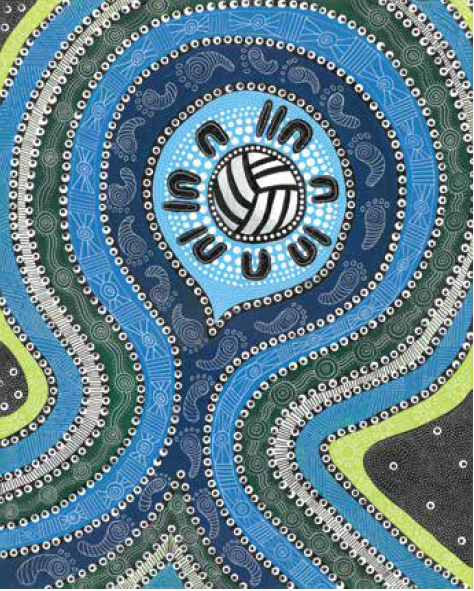